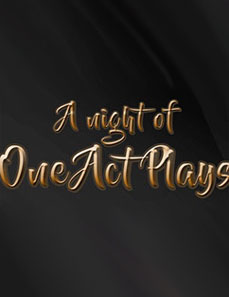 "A Night of One Acts"

An Original Work by Kristyn Shelley-Olsen

Synopsis: This play is about a family dinner. The Daughter is writing a school assignment for school that contradicts the scene that is at the dinner table. The Daughter sees it unfolding as the play goes on and calls it out at the end.

As Time Goes By

An Original Work by Randi Nieman

Synopsis: Two desperate women rob a bank - not actually rob, just delay business for a while - in an effort to get a date with the man of their dreams.

Synopsis: The Imaginators is the story of three children and the power of imagination. Anne and Tim have just moved to a new town. Anne refuses to play with her little brother, Tim, fearing that kids at her new school will see them and make fun of her. Then they meet the girl from next door, the fabulous Nina Frances Elizabeth Vanderhelden. Using moving boxes and other objects found in the garage, Nina takes an eager Tim and a reluctant Anne on a great make-believe adventure.

Synopsis: Waldo Weasel, the cobra in human form, shows up in Pumpernickel Pass with a phony gold map. He talks lovely Buttercup O’Shay into staking him. (Buttercup runs the General Store and Lending Library.) Alas, the gold strike doesn’t pan out, but no matter! Waldo discovers Buttercup has a paper proving that her ancestor, the first governor of California, lent the new state a small fortune. The sum is so great it can’t be paid back, so the heir will own California! Waldo realizes Buttercup will refuse his oily offer of marriage so he plots to get rid of her and marry the next heir in line, Stella Dimdome.

(A Compilation of Eight Musical Numbers)